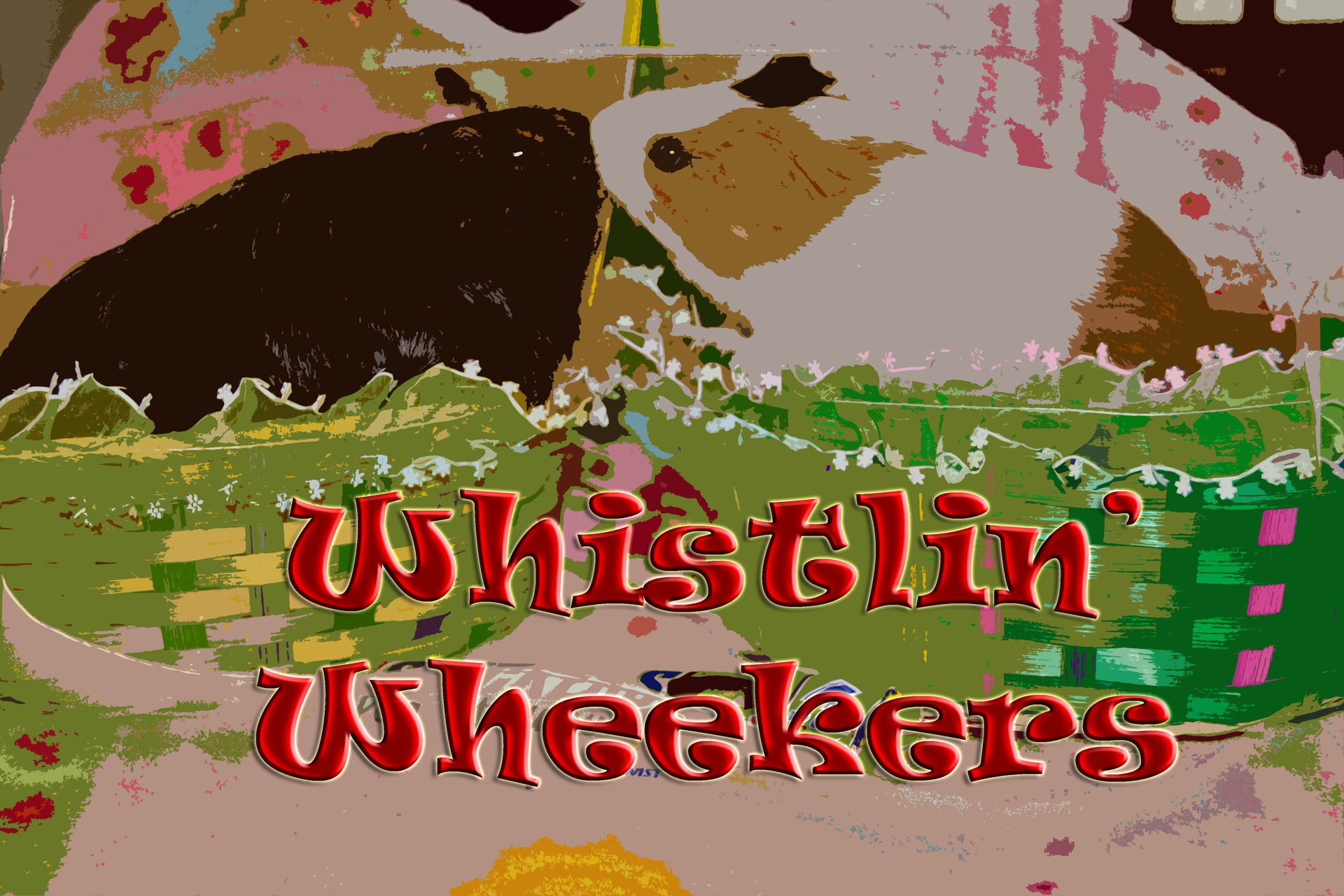 Where Piggies Are Having A Whistlin' Good Ol' Time,
Or Just A Wheek Away For More Joy To Yours

Piggie Facts that you may want to know...

If you are not familiar with the guinea pig language, here's some helpful info:

Junior Boar: A male guinea pig that is less than 4 months old.

Junior Sow: A female guinea pig that is less than 4 months old.

Sire: A male guinea pig that is the father of a litter.

Dam: A female guinea pig that is the mother of a litter.

Self: A solid color

Solid: Two or more colors that make up a solid.

Brindle: One dark color and one white color intermingled consistently over entire body.

Tortoiseshell: Well-defined black and red rectangular patches of color even and uniform across entire body.

Tortoiseshell & White: Well-defined black, red, and white rectangular patches of color, divided along a line that runs down the middle of the back and belly.

Agouti: Each hair has alternate dark and light bands of color.

Marked: Has patches of different colors or specific markings.

Breeds:There are 13 recognized breeds of guinea pigs in the United States. The breed standards are developed by the American Rabbit Breeders Association.  Lunkyara's are not recognized, YET...but we are hopeful!.

American's:  We've had these; but now we are breeding Silkies, Texels and Peruvians.

The American, sometimes referred to as the "English" cavy, is the most common breed of guinea pig, as well as one of the oldest. The hair is short, smooth, straight, and sleek. It is found in a wide variety of colors and color combinations and has a Roman nose (wide and curving). Its body is medium length, and of about the same circumference from the shoulder back to the hip.

The American Satin has the same appearance as the American, but the coat is fine, dense, and soft, with a glossy sheen, and feels like satin to the touch.

The White Crested has a short, smooth coat with a distinctive white, circular rosette on the top of its forehead. Except for the crest, there should be no other white spots on the animal. There are many color varieties, but cannot include Dalmatian, Himalayan, Dutch, Roan, or Tortoiseshell and White, or other varieties which have white hair elsewhere on the body.

The Teddy has a short, wiry, dense coat. The hairs, and even the whiskers, are kinked. The coat is resilient, meaning it returns to its original position after being disturbed. The body of the Teddy is similar to the American in length, and it has a Roman nose.

The Teddy Satin has the same general appearance as the Teddy, but the coat has a glossy sheen.

The Abyssinian (Aby, or Abby) is one of the oldest breeds of guinea pigs. It is recognized by the symmetrical rosette (hair radiating symmetrically from a center) and erect ridge patterns on its body and head. The number of rosettes can vary, but to be shown, an Abby must have at least eight (10 are preferred), and they must be clearly defined. The Abyssinian also has a mustache of raised fur around its nose. The fur is coarse and is found in a multiple of colors and color combinations.

The Abyssinian Satin has the same appearance as an Abyssinian, but with a satin sheen to the fur. Like the Abyssinian, it must have a pattern of rosettes and ridges, and possess a minimum of 8 rosettes in order to be shown..

List of the long haired breeds of guinea pigs

The Coronet is a longhaired breed with a single rosette on the top of the head. The hair from the rosette to the rump is long, without a part. It has a Roman nose.

Peruvians**these are types that we will be breeding in 2015.

The Peruvian was the first recognized longhaired breed. It is noted for the long, dense, soft "sweeps" of hair that can grow to over a foot in length. The hair on the head grows forward, covering the head, and giving the animal an even, circular appearance when viewed from above. Show Peruvians need regular grooming and the hair is often wrapped to keep it from becoming soiled or tangled. Because of the amount of time and effort needed to groom a Peruvian, this breed is not recommended for a pet, although some owners may trim the hair for easier care.

The Peruvian Satin has the same appearance as the Peruvian, but the coat has a glossy sheen, and feels like satin to the touch.

Silkie's: these are types that we breed now.

The Silkie, called the "Sheltie" in England, was originally called the "Angora." It is a longhaired breed, but unlike the Peruvian, there is no long, frontal sweep of hair that covers the face. Instead, the hair sweeps back from the head forming a mane, and there is no part down the back. When viewed from above, the Silkie appears tear-shaped. The hair is softer, finer, and tends to be shinier than the Peruvian. As with the Peruvian, the coat needs daily grooming and the hair is wrapped to keep it clean and tangle free.

The Silkie Satin has the same general appearance as the Silkie, but the coat has a glossy sheen, and feels like satin to the touch.

Texel: We are breeding now, but no puppies just yet!

The Texel has long, thick, soft hair that forms ringlets or curls over the entire body, even the belly. The body is short and compact, and the head is broad and well-rounded. Because the hair is both long and curly, this breed is one of the most difficult to keep well groomed.

Oops, you forgot something.

The words you entered did not match the given text. Please try again.